Australia is one of the few countries with official commitment to multiculturalism.

Established as a settler society with Anglo-white majority, it evolved gradually into a diverse multicultural society, with a population consisting of 25.5 million people, of which 26% are born overseas, 18% are non-English speaking background, and 2.1% are Indigenous people (2017). For more than two centuries, Australia has pursued an aggressive immigration policy that contributed to a steady growth of a white majority population. After the abolition of the White Australia Policy, the population has become more diverse. Since 1973, the Australian government officially announced multiculturalism as a policy.

Today, Australia has several programs aimed at the integration of immigrants. Following the Galbally Report (1978), there is a robust multicultural policy, which promotes multi/intercultural education in schools, funds ethnic communities and organisations, incorporates language programs, and provides for ethnic representation in media. While the Australian government remained committed to multiculturalism, there has been a growing emphasis in recent years on social cohesion and harmony, as the diversity agenda gained increasing ground. 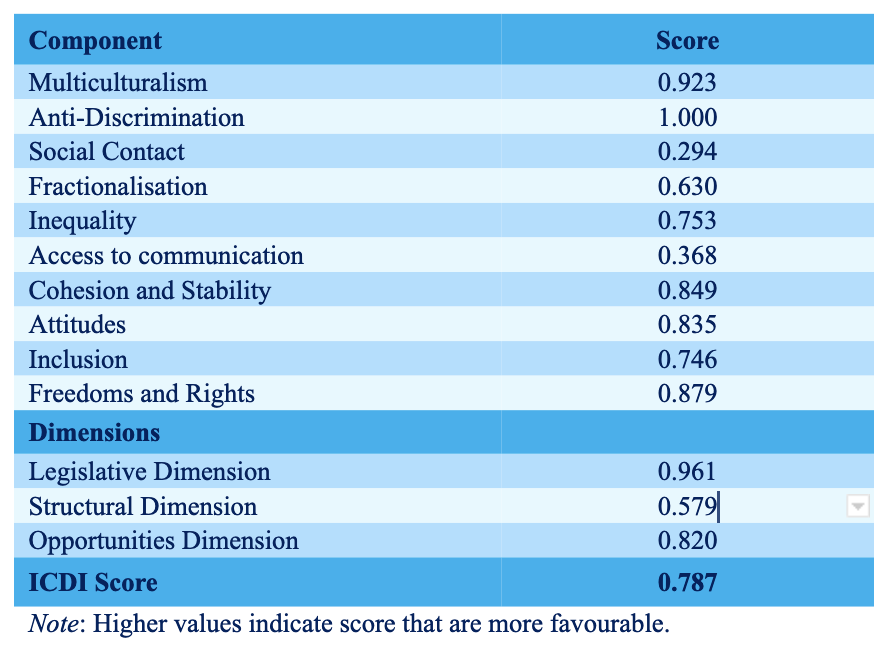 Overall, Australia has achieved a high ICDI score of 0.814. Half of the component scores are above 0.80, with three more above 0.70. The high scores in the multiculturalism and anti-discrimination components indicate a conducive, positive legislative environment. Relatively low scores in the social contact and access to communication components indicate slightly less positive social connectedness. However, Australia’s high scores in intercultural environment tends to show high level of acceptance of minorities, greater civil liberties, above average degree of social cohesion.

Australia’s multicultural legislative environment offers opportunity for social inclusivity. However, in comparison to the legislative dimension, Australia has achieved relatively lower scores in some the structural dimension. For example, social contact and access to communication have low scores, indicating that contact is lacking among culturally diverse groups while access to communication may be limited for some communities. Australia could improve its ICDI score by giving more attention to intercultural interaction and provision of more access to communication for remote communities. However, social cohesion will be weakened, with intercultural relations further compromised and social marginalisation deepened if the structural dimensions remain unaddressed.