Belarus has an ethnically diverse population with a majority ethnic Belarusian (83.7%), and 16.3% of ethnic minorities, including Russian 8%, Polish 4.4%, Ukrainian 1.7%, other 2.4% (CIA Factbook 2021). The main challenges to diversity in Belarus relate to language rather than ethnicity. This is associated with the promotion of Russian and the marginalization of the Belarusian language. Since 1920s, Belarus has been a member of the Soviet Union Belarus; its history was intertwined with its more powerful neighbours. The Russian language dominated the daily business and education in cities and urban centres while Belarusian was confined to the countryside. This has created a division within the society (Smolicz and Secombe 2003).

Currently, the Belarus constitution guarantees and recognizes fundamental rights in the areas of culture, the right to preserve one’s national identity, selection, and usage of language of communication and education. Furthermore, the constitution states that the state has responsibility to preserve and sustain the culture and heritage of all ethnic communities residing in Belarus (UNESCO 2006). However, the emphasis on the state’s role in promoting cultural diversity has been criticized that it limits the financing of cultural programs to align with state politics (ICELDS 2018). 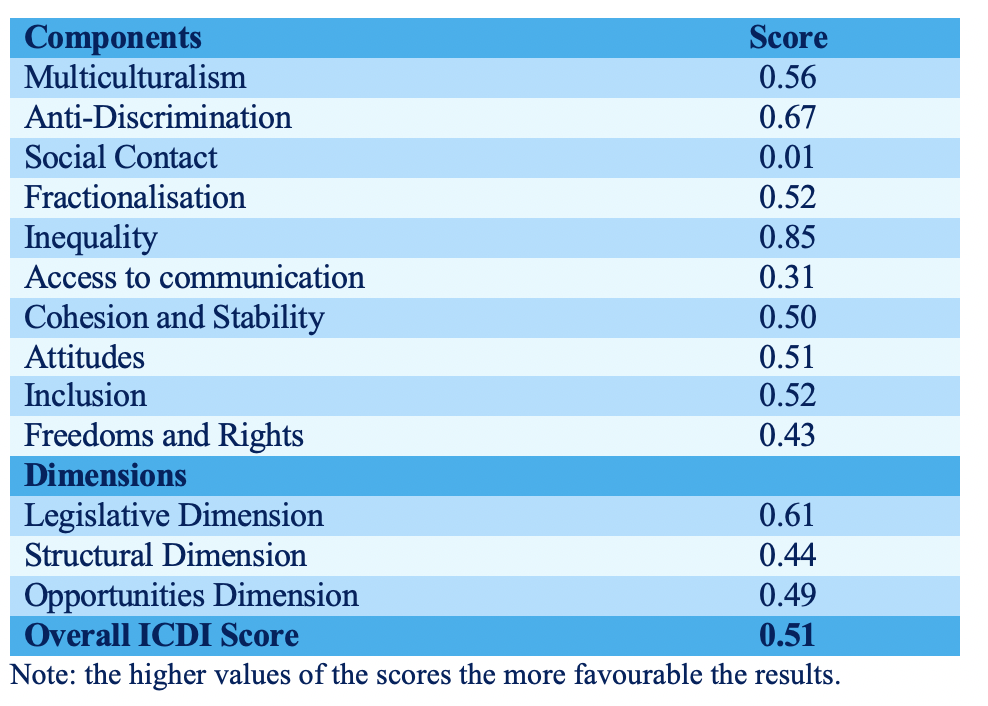 Belarus has attained an overall ICDI score of 0.51 in the current articulation of the ICDI results. A score above 0.8 in the component of inequality signals a high degree of intergenerational social mobility and high levels of educational attainment among the population. A score above 0.6 in the component of anti-discrimination signals the moderate presence of anti-discrimination acts or policies in the country. In contrast, a score of 0.01 in the component of social contact indicates little intercultural participation between different ethnic groups. It also indicates a low number of indigenous and immigrant living languages.