Bulgaria has an ethnically diverse population with majority ethnic Bulgarians (76.9%), and less than a quarter of ethnic minorities (Turkish 8%, Romani 4.4%, other 10.7%: CIA Factbook 2021).  Due to the Bulgaria’s relatively low levels of immigration, immigrants are not seen as a major diversity challenge, and Bulgaria is generally perceived as a tolerant multicultural country.

After 1989, multiculturalism, the recognition of the diversity and the preservation of minority rights became inseparable components of Bulgaria’s democratization and goal to join the EU (Zhelyazkova et al. 2010). Immigrants in Bulgaria enjoy basic rights and security but not equal opportunities. A 2018 amendment to the Labour Migration and Labour Mobility Act eased the restrictions on immigrants especially in the areas of education, health, and the labour market as well as the introduction of anti-discrimination policies. However, Bulgaria remains more restrictive than most EU countries in terms of immigrants political participation (no voting rights) and Nationality which remains highly restrictive despite amendments introduced in 2014 (MIPEX 2020). Ethnic minorities as the most important “significant others” do not receive full and genuine acceptance by the Bulgarian majority population despite their integration in political and public life (Zhelyazkova et al. 2010). In particular, the Roma face ongoing exclusion, intolerance, and discrimination. 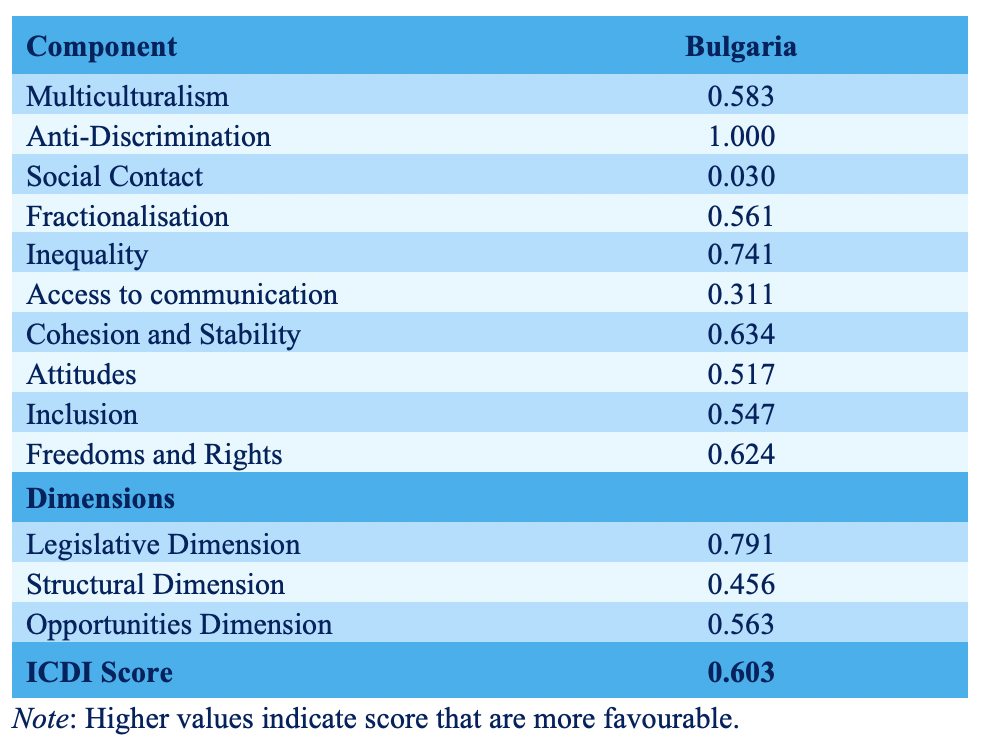 Compared to its fairly positive situation in relation to the legislative dimension, Bulgaria achieves relatively lower scores in some components of its structural and opportunities dimensions. The lower scores are related to components of social contact and access to communication. Bulgaria’s ICDI score could improve if more opportunities are encouraged to facilitate social contact and intercultural participation while improving access to communication to communities located in rural parts of Bulgaria.