Along with Sweden and Australia, Canada is often considered one of the few countries that adopted official multicultural policy (Kymlicka 2012). Moreover, it is the only country with a Multicultural Act legislated at the federal level since 1988. In the provincial state of Quebec, interculturalism is the official diversity policy, and aims to protect the dual lingual heritage in Quebec. Given Canada’s comprehensive immigrant integration policies, immigrants are accepted in the society as equal citizens, with broad public support for newcomers (Solano and Huddleston 2020). Across diverse sectors in the society, such as political participation, education and labour market, ethnic minorities and migrants are guaranteed equal opportunity and inclusion.

Multicultural and intercultural policies in Canada affirm longstanding support for the integration of immigrants, through policies that promote diversity, equity, and inclusion (Tolley 2011). Multiculturalism is incorporated in national curriculum, media, citizenship laws, and multicultural programs that “provide funding to support the integration and inclusion of ethnic, racial, religious and linguistic minorities” (Tolley 2011, p. 26). Canada’s multiculturalism is also applied through anti-discrimination and anti-racism policies protecting minorities against all forms of discrimination, and provision of equal rights guaranteed by legislation (Solano & Huddlestone 2020). Funding for the preservation of languages is also part of the multicultural program implemented in relation to the Indigenous population in the country. The dual multicultural and intercultural diversity policies in Canada are often the subject of debate, yet Canada continues to enjoy an inclusive and robust platform for intercultural dialogue. 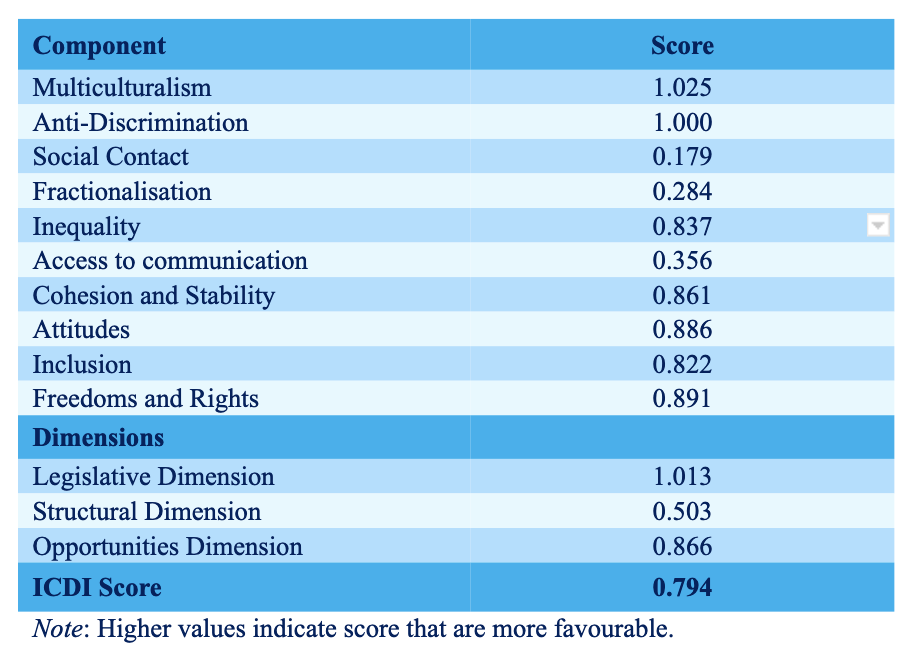 Canada today has multicultural legislation at the national level, and intercultural dialogue in Quebec that guarantees support for pluralism and inclusivity. The relatively lower scores in the structural dimension such as in social contact and access to communication indicates that limited intercultural contact can hinder greater cross-cultural dialogue and integration at the community level. Canada can achieve higher ICDI score by giving focusing on intercultural interaction and widening access to communication to disadvantaged communities. While Canada’s relatively equitable and inclusive environment provides opportunity for greater social cohesion, failure to address participation and contact among the diverse communities can hinder intercultural dialogue.