Chile was under totalitarian rule in the 1970s and 1980s. For over 20 years, the Chilean society has been radically transformed along identarian lines built on the ideal of a “white society” that highlights European ancestry while denying the country’s indigenous roots. Since the 1990 return to democracy, political and economic stability made Chile an attractive destination for immigrants. For decades, immigration from neighbouring countries has increased sharply (IOM 2006). Chile today has a multicultural society composed of immigrants, indigenous people, and white-nonindigenous. The majority (88%) are whites, and others include Mapuche (9.1%), Aymara (0.7%), other indigenous groups 1% (2012 est.: CIA Factbook 2021). The Chilean government has agencies and departments tackling issues of integration, multiculturalism and promote diversity. The Department of Indigenous Peoples is responsible for indigenous issues, and a “National Human Rights Plan” has been adopted in 2007 (UNESCO 2007).

Immigrants in Chile enjoy access to a myriad of services, including health care, education, and labour market. In addition, Chile is one of only five countries in the world to offer immigrants voting rights in national elections regardless of their nationality, which plays an integral role in the process of integration (IOM 2020). Furthermore, Chile passed several anti-discrimination bills that protect immigrants in Chile in case of discrimination based on race/ethnicity, religion, or nationality. However, reports show that Chilean public agencies need to be more assertive in the implementation of these laws (IOM 2020). 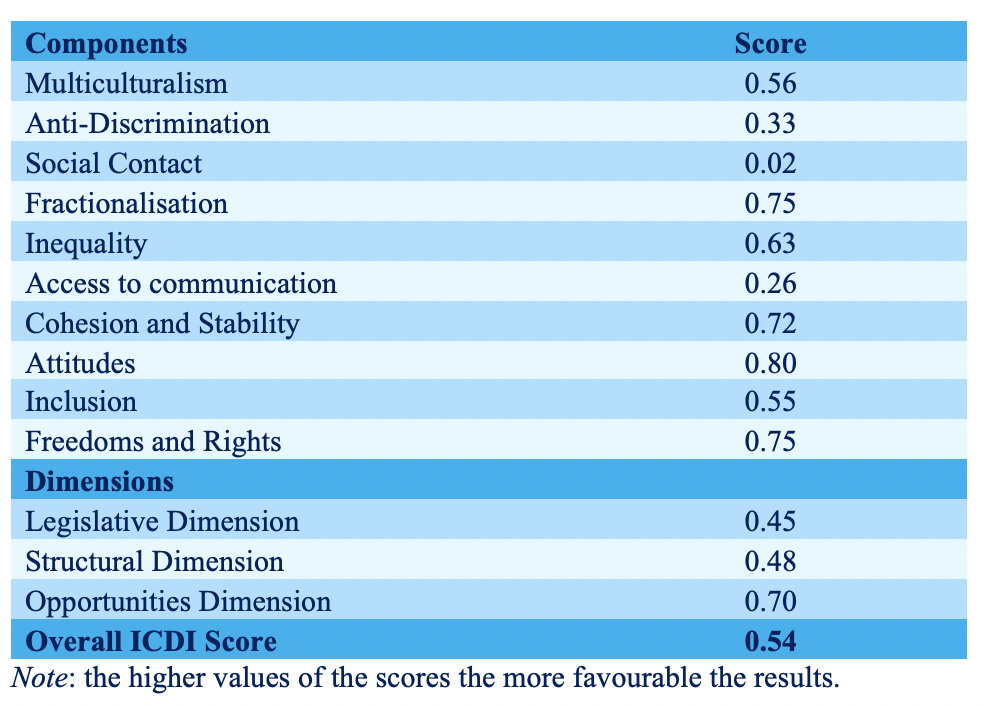 Chile has achieved an overall ICDI score of 0.54. A score of 0.80 in the component of attitudes, signals an above average global social tolerance index. Scores above 0.7 in the component of fractionalisation indicates that conditions to promote intercultural participation are relatively favourable. This also signals that there is an above average degree of social contact amongst different ethnic groups. Similarly, a score of 0.72 in the components of cohesion and stability, and freedom and rights indicate a favourable climate to nurture intergroup cohesion with the essential frameworks mostly in place to promote the practice of intercultural dialogue. In contrast, lower scores in the components of social contact reflects low levels of actual cultural participation and a possible erosion of immigrant and indigenous languages.

Compared to a relatively positive situation around its opportunities dimension, Chile has below average scores in its legislative and structural dimensions. The lower score in its legislative dimension relates to the components of anti-discrimination. The lower score in its structural dimension relates to the components of social contact and access to communication. Chile’s ICDI score could improve with more attention to strengthening its anti-discrimination acts and policies to strengthen its legislative dimension. It could also create additional platforms for increasing social contact amongst different ethnic groups which encourage intergroup contact and intercultural participation.