Georgia has an ethnically diverse population with a majority ethnic Georgian  (86.8%), and less 13.1% ethnic minorities (including Azeri 6.3%, Armenian 4.5%, Other 2.3%) (2014 est.: CIA Factbook 2021). Like all post-soviet states, the 1990’s liberal constitution of Georgia brought an era of change in terms of protecting ethnic minorities and promising prosperity and multiculturalism, driven by access to European integration. A major issue for integration policy in Georgia relates to linguistic diversity. While some reforms have been implemented in the education system, linguistic barriers remain a hindering factor in the integration of minorities within the Georgian society (Darchashvili 2020).

Since 2008, the Ministry of Culture and Monument Protection of Georgia has funded programs which support intercultural dialogue and encourage the involvement of vulnerable communities in the cultural life of Georgia. With the presence of multiple religious groups existing as part of the same community in Georgia, there is a degree of social tolerance which allows for intercultural interactions to support mutual exchange. However, the concept of cultural diversity has been subject to criticism as it has been interpreted as a threat for Georgian culture (Liparteliani 2019). 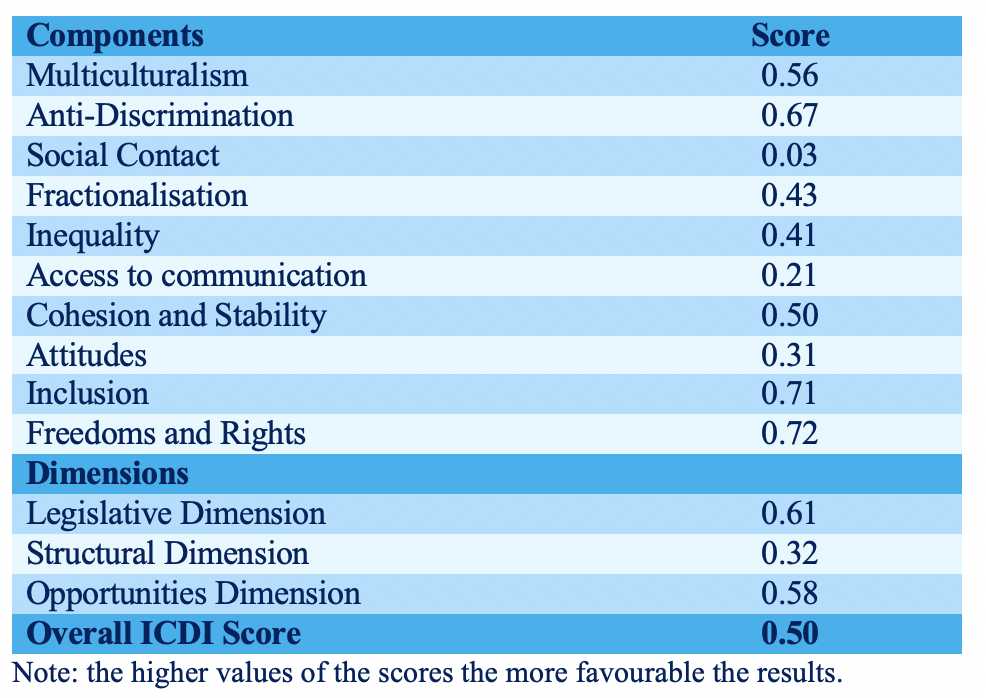 Georgia has achieved an overall ICDI score of 0.50. A score above 0.7 in the components of inclusion, freedom, and rights signals fairly favourable conditions for intergroup relations with reduced discrimination of ethnic minorities and a freedom of domestic/foreign movement respectively. A score above 0.65 in the component of anti-discrimination indicates some presence of anti-discrimination acts or policies in the country. However, a low score of 0.03 in the component of social contact suggests low levels of intercultural participation and the erosion of indigenous living languages and immigrant living languages.

Georgia has a fairly stable legislative dimension which sets the basic legislative and policy foundations for interculturalism to emerge among different communities. An average situation relating to the intercultural opportunities dimension signals that individuals’ capacity to engage in intergroup interactions are encouraged in some ways. This relates to favourable situations around the components of inclusion and freedom and rights. However, if racist attitudes towards other groups continues and global social tolerance index is not improved, opportunities for intercultural interactions may continue to decline. Georgia can improve its overall ICDI score by strengthening its structural dimension. It can do so by increasing platforms for social contact and accesses to communication to encourage higher levels of cultural participation.