Indonesia was a former Dutch colony and was also influenced by early Portuguese traders. It adopted “unity in diversity” (Bhinneka Tunggal Ika) the national motto after its independence from Holland, to reflect Indonesian ethnic, cultural and linguistic diversity. The Indonesian population consists of two main ethnic groups, Javanese (40.1%) and Sundanese (15.5 %), while many other ethnic groups including Malays account for the remaining 44.4% of the population (2010 est.: CIA Factbook 2021). For more than 30 years (1967-1998), Indonesia had centralized policies that emphasized uniformity, which suppressed communal identities and diverse cultural practices. In 1999, a process of democratization and political decentralization led to the flourishing of ethnic identities. However, this was marred by several clashes among different ethnic/religious groups that flared because of past disputes and growing economic inequalities (Ahnaf 2018).

The existence of high levels of inequality in Indonesia deters greater interethnic and intercultural interaction. .In addition, there is no national anti-discrimination law in Indonesia. Instead, a number of laws and sector-specific regulations prohibit ethnic, racial, and religious discrimination. However, the lack of specific enforcement mechanism or agencies limits the implementation and enforcement of the anti-discrimination laws (MIPEX 2020). Recently, there has been some improvement in Indonesia’s immigration policy in terms of increasing immigrants and asylum seekers access to health services. However, obstacles remain across many sectors, including education and political participation (MIPEX 2020). 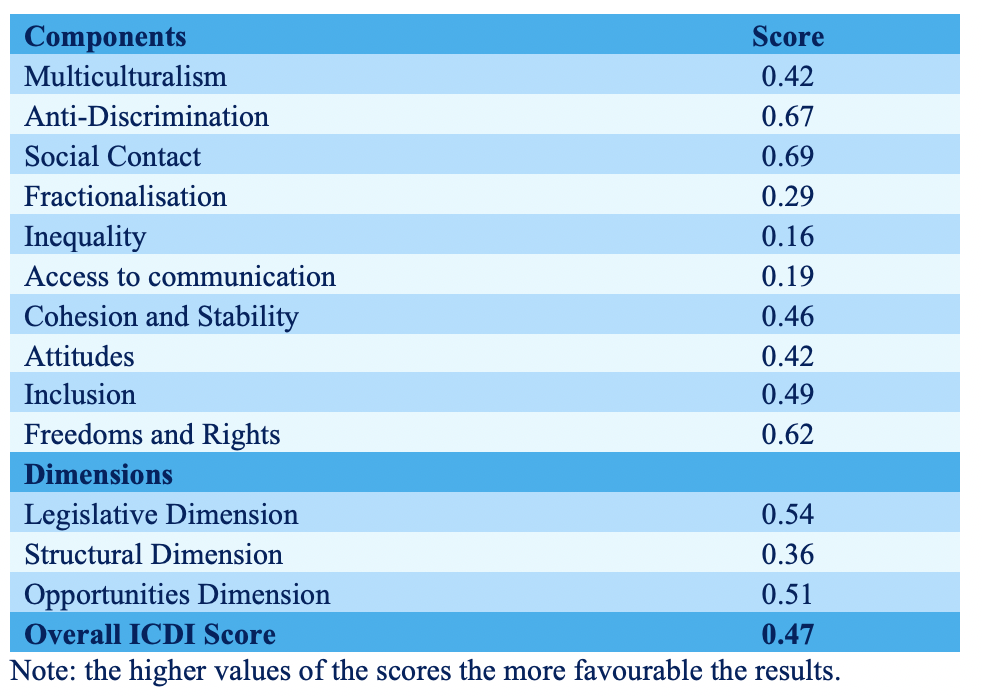 Indonesia has achieved an overall ICDI score of 0.47, which is below the average overall score of the current ICDI results. A score of 0.69 in the component of social contact indicates the presence of intercultural participation amongst different ethnic groups in the population along with indigenous living and immigrant living languages. Similarly, a score of 0.62 in the component of freedoms and rights signals a fair degree of freedom of domestic and foreign movement and travel.

Indonesia has achieved average scores relating to its legislative and opportunities dimensions. A lower score in the structural dimension can be attributed particularly to lower scores in the components of fractionalisation, inequality and access to communication. Indonesia can strengthen its overall ICDI score by encouraging intercultural participation amongst different ethnic groups in the population. Preserving indigenous living languages would also help to improve the platforms available for social contact in the country. Indonesia can also consider enhancing its migrant integration measures to further enhance its legislative dimension.