Italy has a long history of outwards migration. Recent migration to Italy, which began in the 1970s, included a large influx of migrants settling in major Italian cities. Today, Italy has become the fifth most popular migrant destination in Europe (in 2019), and the third European country in total numbers of refugees and asylum seekers (in 2018: IOM 2020). Despite a growing number of immigrants and asylum seekers, Italy’s approach to integration is classified as “Temporary Integration”. Foreign citizens have access to basic rights in the areas of health, education, and access to the labour market. However, they face a disadvantage when it comes to long-term permanent settlement, nationality acquirement, as well as political participation, which hinders their integration and participation as full Italian citizens (MIPEX 2020).

Recently, some Italian regions and municipalities have attempted to engage minority communities. For example, some cities have established consultative organizations or special councillors to promote civic cohesion and ethnic, religious, and cultural diversity, as well as opening cultural centres, and passing legislation to recognize interculturalism. However, Italy’s approach towards immigrants and minorities inclusion remains fragmented on a national level, and the few national integration initiatives tend to focus almost exclusively on employment limiting migration into the country to meet specific labour demand (Tolley 2010). 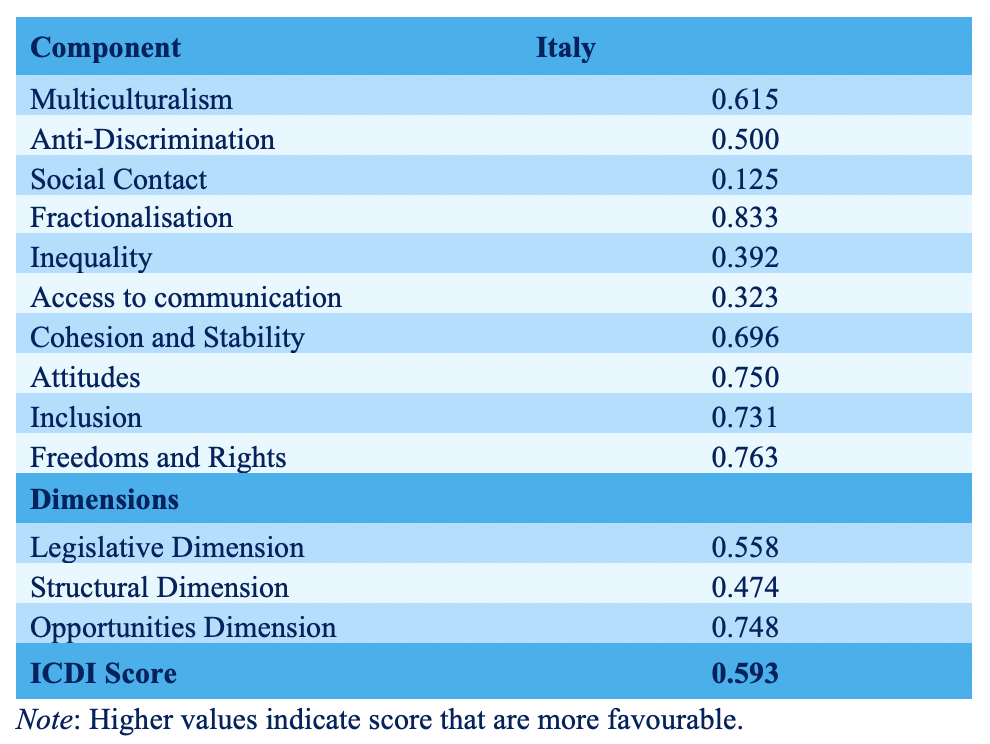 Italy has achieved an overall ICDI score of 0.593. Scores above 0.7 in the components of intercultural attitudes, inclusion and freedom and rights contribute to a favourable intercultural opportunities dimension which promotes communities’ capacities to engage meaningfully in intergroup interactions. Relatively moderate scores in the components of multiculturalism and anti-discrimination contribute to a limited legislative dimension which indicate that while there could be a presence of multicultural policies and anti-discrimination laws, there is possibly a lack of emphasis on sustaining them at a national level.

Compared to its fairly positive situation in relation to its intercultural opportunities dimension, Italy achieves lower scores in its legislative and structural dimensions. These are particularly related to the components of social contact, fractionalisation, inequality, and access to communication. Italy’s ICDI score could improve with an increased emphasis on multicultural policies and anti-discrimination laws at a national level. Additional provisions could be made to enhance the platforms available for social contact and provisions for access to communication for those living in rural communities and those of foreign backgrounds. These efforts can also possibly contribute to reducing levels of inequality between different communities and, strengthen Italy’s structural dimension overall.