Japan has a homogenous population consisting of 98.1% ethnic Japanese, and a small immigration population (1.9%), mainly consisting of Chinese, Korean, and others (2016 est.: CIA Factbook 2021). Between 2009 and 2010, Japan has taken some steps towards the development of an integration framework, establishing “one-stop-shop” comprehensive consultation centres for multicultural coexistence. The aim is to provide foreign nationals with quick advice on social security, education, health and residence and employment procedures (MIPEX 2020).

However, Japan lags behind most developed countries in terms of diversity and immigrant integration policies. There are no formal policies or legislation, and immigrants are often denied basic rights and equal opportunities and have no protection from discrimination. In the absence of dedicated anti-discrimination laws and policies, potential victims of racial, ethnic, religious or nationality discrimination have no opportunity to file complaint (MIPEX 2020; Tolley 2011). 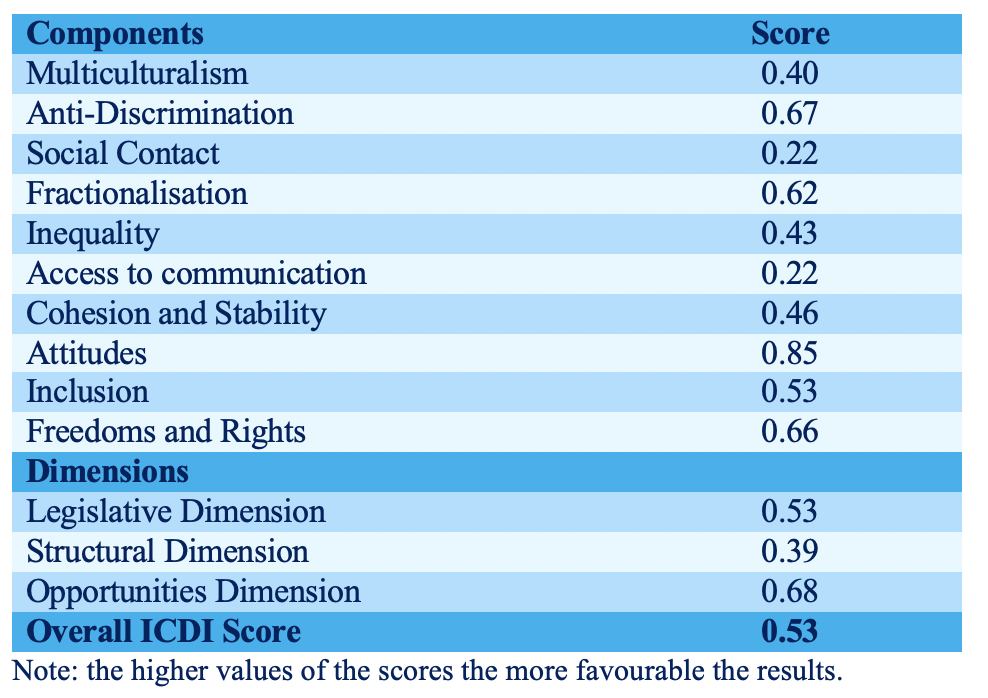 Japan has attained an overall ICDI score of 0.53, an average score in the current articulation of the ICDI results. Japan’s most favourable component is intercultural attitudes, with a score above 0.8. This indicates an above average capacity of the population to engage in intergroup interactions. A score above 0.6 in the component of anti-discrimination signals a slight, above-average presence of anti-discrimination acts or policies in the country. Similarly, a score above 0.6 in the component of freedom and rights signals a moderately positive situation around the freedom of domestic movement, foreign movement, and travel.

Compared to its slightly positive situation pertaining to its opportunities dimension, Japan achieves a lower score many components of the legislative and structural dimensions. A lower score in its structural dimension can be attributed to low scores in the components of social contact and access to communication. Japan can improve its ICDI score by encouraging inter-cultural participation and increasing the number of platforms available to promote multiple accesses to communication. It can also strengthen its legislative dimension further by implementing multicultural/diversity acts or policies. Legislative efforts to enhance multiculturalism will also help to promote intercultural interactions and contribute to enhancing equality, cohesion, and stability among the population.