Nigeria is a multicultural country of over 521 languages and several ethnic and sub-ethnic groups. The four largest ethnic groups include the Hausa (27.4%), Igbo (14.1%), Yoruba (13.9%) and Fulani ethnic groups (6.3%). The rest of the population is composed of several smaller groups (CIA Factbook 2021). British colonization in Nigeria had led to ethnic and cultural conflicts that erupted as a result of involuntary unification of the country in 1914 (Edewor et al. 2014). Historically, ethnic and racial disputes in Nigeria are aggravated by the inequitable wealth distribution and economic disadvantage among the country’s regions (Edewor et al. 2014). In 2018, Nigeria was among the 10 top countries with the highest number of internally displaced people due to violence and conflict (IOM 2020).

At the legislative level, Nigeria’s federal government attempts to ensure the representation of all ethnic groups. However, multicultural, and ethno-racial integration policies are limited, and often lack proper implementation and fail to capture the complex issues of diversity in the country. This is exacerbated by competing interests and segregation of cities along ethno-religious lines, often leading to confrontations among different ethnic groups. The constitution of Nigeria prohibits discrimination in all of its forms, and the country has taken substantial steps in the ratification of major international anti-discrimination laws, however, there remains a gap in the enforcement of anti-discrimination laws in the country (Arowolo 2020). 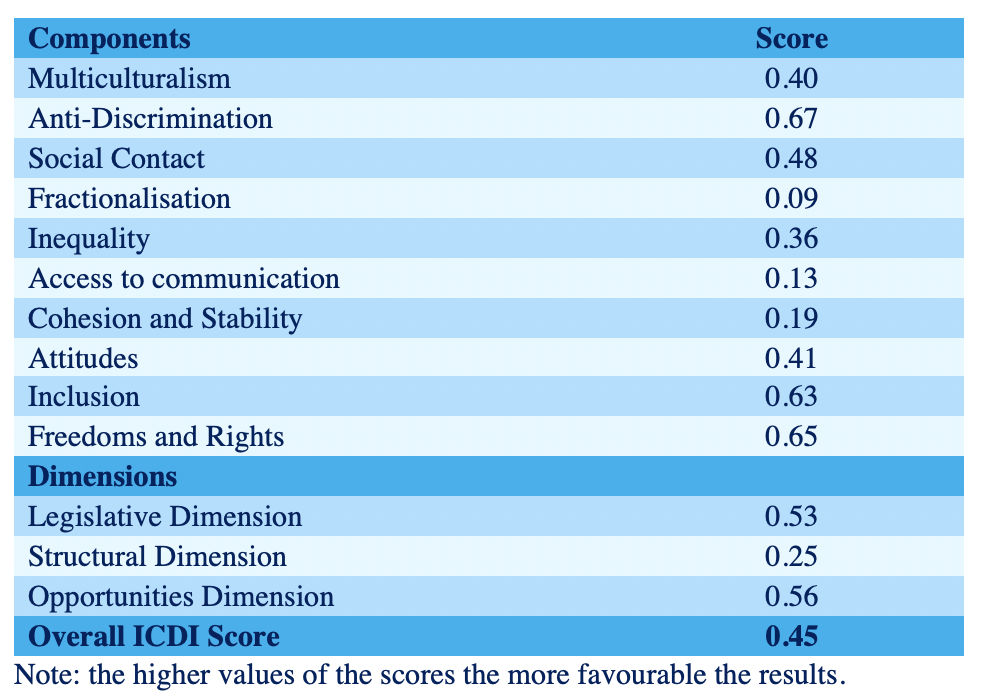 Nigeria has achieved average scores in its legislative and opportunities dimension, and a relatively lower score in its structural dimension. The lower score in its structural dimension can be particularly attributed to the components of fractionalisation, access to communication, cohesion, and stability. Nigeria can strengthen its structural dimension by facilitating social contact and intercultural participation while improving access to communication to different ethnic communities across different parts of Nigeria. By addressing state fragility, Nigeria would also be able to facilitate increased cohesion and stability amongst different cultural groups in the country. Nigeria can also enhance its overall ICDI score by strengthening its legislative dimension. This can be done by enhancing existing multicultural / diversity acts or policies, promoting migrant integration measures which could also contribute to improving state fragility.