Slovenia is a small European country, in the Balkans and was part of Yugoslavia for most of the 20th century. Almost 17% of the population are ethnic Balkan minority while 42% are religious minority (CIA Factbook 2021). However, Slovenia doesn’t have official multicultural policy. Like many European countries, Slovenians enjoy basic rights and security, but it has less developed integration policies, with weak access to equal opportunities (Solano & Huddleston 2020). Over the last decade, Slovenia has seen improvements in integration policies “in the labour market, education, political participation and anti-discrimination” (Solano & Huddleston 2020). In 2016, Slovenia adopted an anti-discrimination act, however, there remains weakness in implementation. This is reflected in slightly unfavourable conditions across education, political participation, and citizenship. While immigrants can settle in Slovenia and are fairly protected from discrimination, the integration policies treat them as potential rather than equal citizens. Immigrants are therefore not seen as strangers rather than neighbours (Solano & Huddleston 2020). 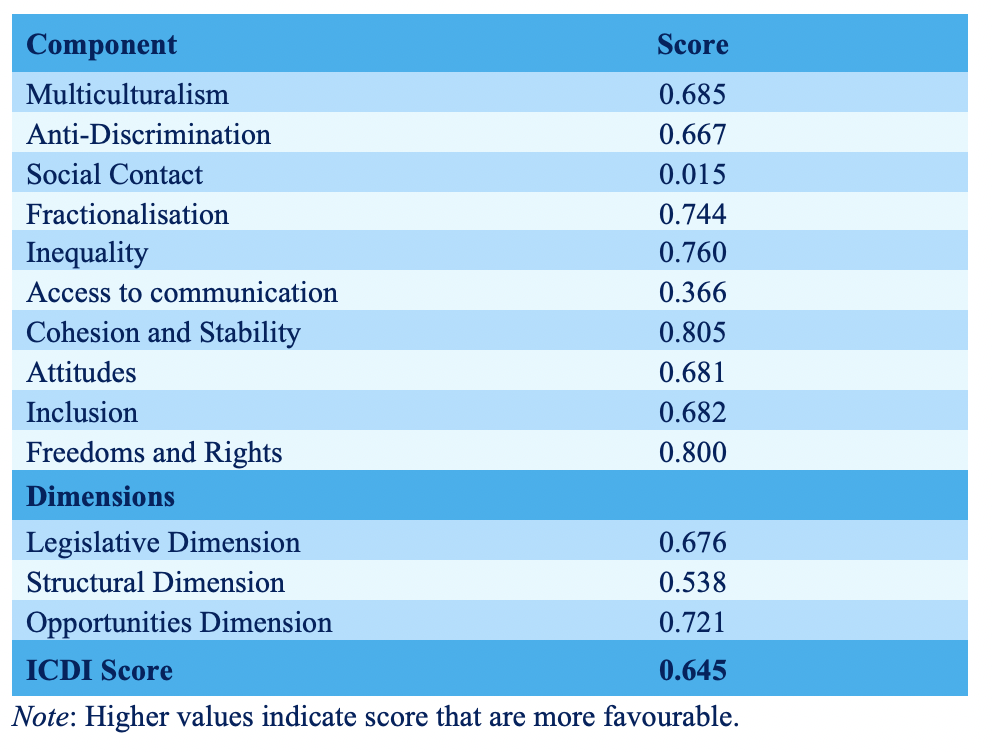 Slovenia’s opportunities dimension promotes press and human freedom and rights. However, in comparison to the opportunities dimension, Slovenia has achieved relatively lower scores in some components of the legislative and structural dimensions. A well-developed integration policy that ensures the political participation and inclusion of immigrants is essential to create conditions for better multicultural and intercultural environment. In addition, the components of social contact and access to communication have low scores, indicating that contact is lacking among culturally diverse communities while access to communication may be limited for others. Slovenia could improve its ICDI score by enhancing opportunities for intercultural interaction and provision of increased access to communication for remote communities. It is also prudent to consider that social cohesion could continue to weaken if the legislative and structural dimensions remain unaddressed.