South Africa has a multiracial society, with over 12 spoken languages. It has an ethnically divided population, with black African composing 80.9%, followed by coloured 8.8%, white 7.8%, and Indian/Asian 2.5% (2018 est.: CIA Factbook 2020). South Africa’s long history of systematic racial ordering and discrimination ended with the demise of the apartheid. However, race continues to occupy a major social and cultural importance with clear racial identities across societies different factions, as South Africans continue to live in social spheres predominantly characterized by race. Racial classification such as the term “coloured” used in South Africa, including on the national census, for persons of mixed-race ancestry (CIA Factbook, 2020). Although schools provide an essential chance for inter-racial engagement for middle-class children, there has been minimal racial integration in residential neighbourhoods (Seekings 2008).

South Africa has had high levels of immigration in recent years as a result of its strong economy and relative political stability, attracting migrants, asylum seekers, and refugees from both within and outside Southern Africa. This has increased the number of international migrants from two to four million between 2010 and 2019, accounting for 7% of the country’s population (IOM 2020). However, over the past decade violence and discrimination against immigrants has surged due to nationwide xenophobic attacks. The government has taken substantial steps in combating discrimination mainly by promoting equality and prevention of unfair discrimination through the 2000 Equality Act, Act No. 4, a comprehensive anti-discrimination law in South Africa. This Act prevents the government, as well as private organizations and individuals, from discriminating unfairly, and it outlaws hate speech and harassment (Pityana 2003). 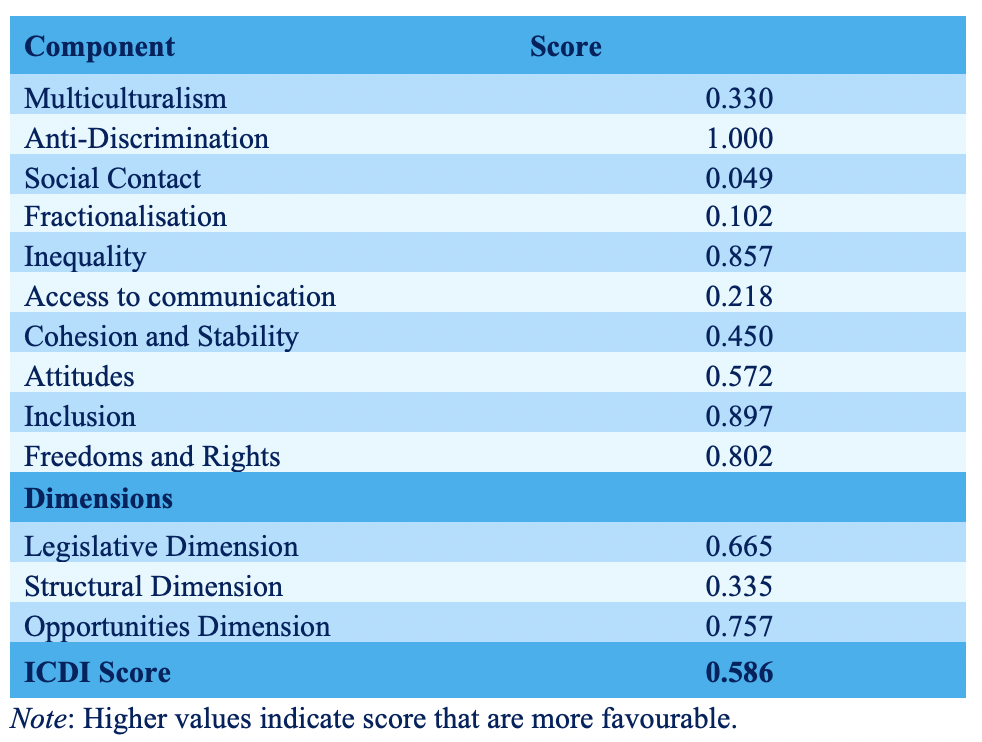 South Africa has achieved an overall ICDI score of 0.586. Scores above 0.8 in the components of inclusion (minority representation) and freedoms and rights contribute to a relatively favourable opportunities dimension. A score of 1.0 in the component of anti-discrimination reflects the emphasis placed on anti-discriminatory laws and policies at a national level. In contrast, lower scores in the components social contact, fractionalisation and access to communication contribute to a weaker structural dimension signalling the lack of tools and support available to promote intergroup interactions and social cohesion.

Compared to its moderately positive situation in relation to the opportunities and legislative dimensions, South Africa has low scores contributing to its structural dimension. These are particularly related to the components of social contact and access to communication. South Africa’s ICDI score could improve with more attention to tourist arrivals, and conserving heritage sites which would aid in creating opportunities for exposure and contact amongst the different groups. Shared access to media and communication amongst different groups can also aid in enhancing existing access to communication, particularly to those who reside outside of urban areas. South Africa can also strengthen its legislative dimension by increasing its attention to formulate and implement laws and policies related to promoting multiculturalism.