Ukraine is a multicultural country with predominantly ethnic Ukrainians (77.8%) and a large ethnic Russian (17.3%), and just 5% other ethnic minority population (2001est.: CIA Factbook 2021). In 2019, Ukraine around 5 million foreign-born residents, most of whom arrived from former Soviet republics (IOM 2020). Ukraine has made progress in providing equal opportunities for migrants and has recently launched awareness campaigns to inform them of their social, political, and healthcare rights. For example, a 2019 law obliges health care practitioners to inform immigrant patients about services covered by the state healthcare system.

According to recent national surveys, the level of acceptance of immigrants in Ukraine remains low. This could be attributed in some part, to restrictive policies that view immigrants as threats, thus minimizing the possibility of integration and prompting high levels of xenophobia and islamophobia and lower levels of social trust (MIPEX 2020). However, the country has made some progress in combating discrimination as Ukraine’s anti-discrimination laws and strong enforcement mechanisms allow victims of ethnic, racial, religious or nationality discrimination to seek justice (MIPEX 2020). In April 2007, a Diversity Initiative was launched with the support of over 40 organisations from the international, civil, corporate, and government sectors with the intention of addressing issues related to migration, globalisation, xenophobia, and racism. Sustained efforts to promote intercultural dialogue is evident through other initiatives like GoGlobal Initiative, which promoted foreign language learning, fostering intercultural dialogue and public diplomacy from 2014. 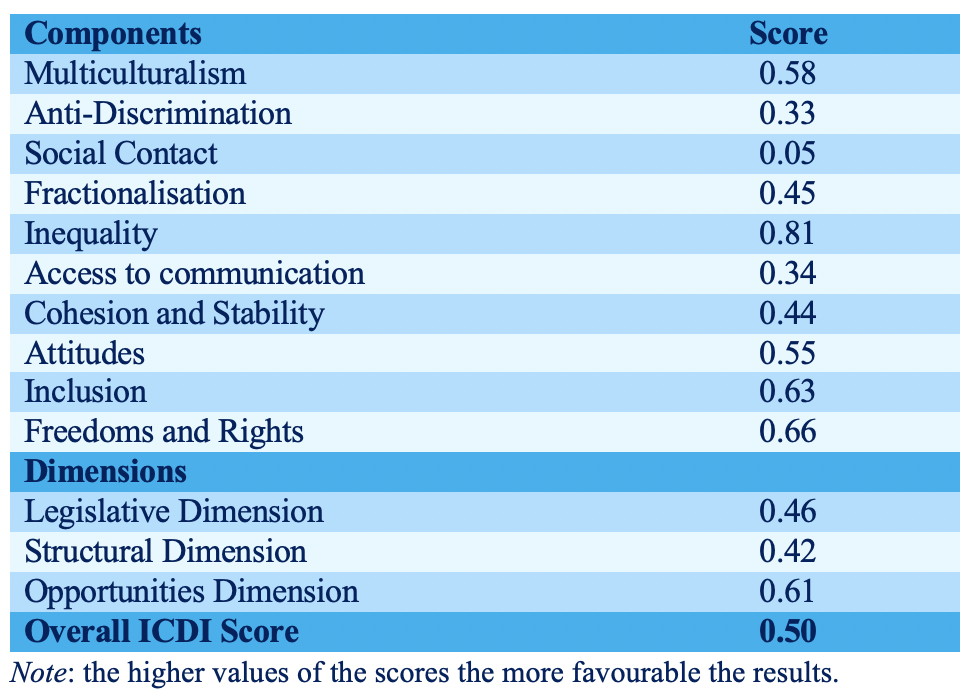 Ukraine has achieved an overall ICDI score of 0.50. A score of above 0.8 in the component of inequality signals a high degree of intergenerational social mobility and high levels of educational attainment among the population. A score of above 0.6 in the component of freedoms and rights indicates a slightly above average environment for the freedom of press, domestic movement, foreign movement, and travel. In contrast, a score of 0.05 in the component of social contact indicates that there is little cultural participation amongst different ethnic groups within the population. It also signals the erosion of indigenous and immigrant living languages that are practised.

Compared to its slightly above average situation relating to the opportunities dimension, Ukraine has achieved scores just above 0.4 in its legislative and structural dimensions. A lower score in its structural dimension can be attributed particularly to a below-average score in the component of access to communication. However, lower score in Ukraine’s opportunities dimension can be attributed to approximately average scores across the components of intercultural attitudes, minority representation and freedom and rights for press, domestic and foreign travel. Ukraine can improve its overall ICDI score by improving its basic legislative and policy context through an implementation of anti-discrimination acts or policies. It can also improve its migrant integration measures by encouraging intercultural participation and preserving indigenous and immigrant living languages. An improvement in access to communication by promoting the use of internet, mobile phones and widening the distribution of newspapers can also help to strengthen Ukraine’s overall ICDI score.