Uruguay has ethnically diverse population, divided between White 87.7%, Black 4.6%, Indigenous 2.4%, and other 5.3% (2011 est.: CIA Factbook 2021). Despite a notable contraction in the number of immigration influx in recent decades due to political and economic issues, Uruguay, historically witnessed a large number of immigration influx throughout the 19th century, which shaped its culture and ethnic/racial dimensions.

In 2014, Uruguay officially recognized historical mistreatments and discrimination of Uruguayans of African descent (OHCHR 2019). However, this had been largely overlooked by policies and successive governments. In recent years, Uruguay has made significant progress in terms of introducing the ethno-racial dimension as a crosscutting theme in analysing access to human rights. This has resulted in the creation of official statistics on ethnic and racial self-identification. It has also led to the: establishment of a new institutional framework to promote equal opportunities for people of African descent, acknowledgement of their historical and cultural contributions to the country and mainstreaming of ethnic and racial issues in public policies (OHCHR 2019; Lopez 2021). While racial/ethnic discrimination has received attention at the institutional level, debates on these issues remain limited within the Uruguayan society and media (Lopez 2021). This might hinder efforts of cultural integration in the country. 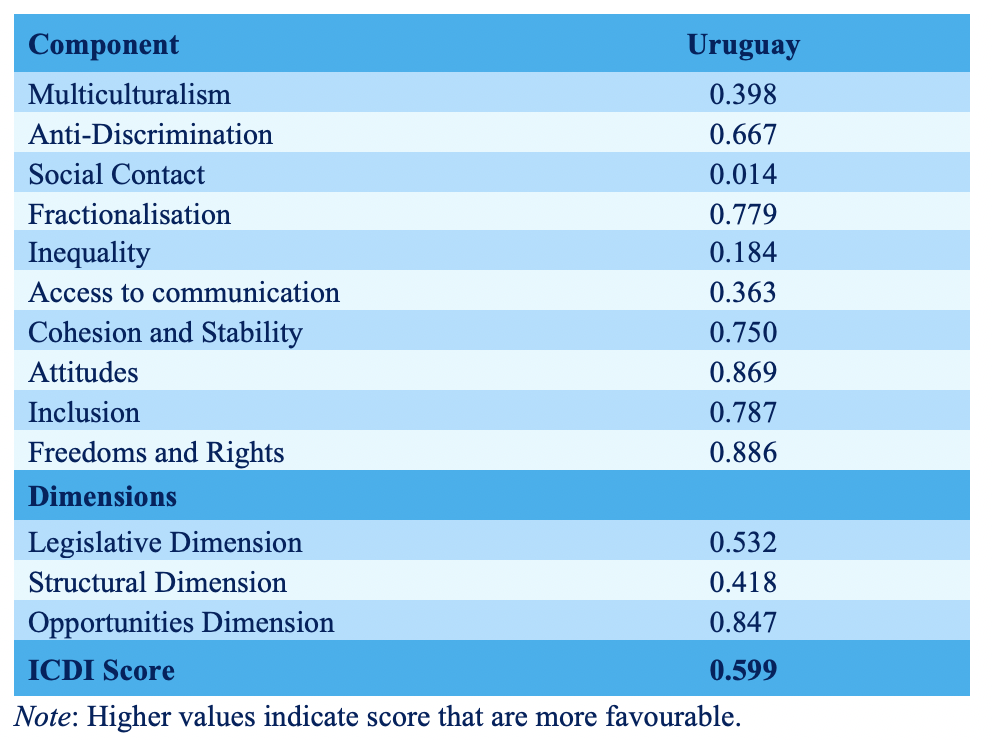 Uruguay has achieved an overall ICDI score of 0.599. Scores about 0.8 in the components of intercultural attitudes and freedom and rights signal a positive situation around opportunities dimension. This could mean that there is adequate representation of minority groups, lower levels of racism and higher degrees of tolerance towards ‘outgroups’ (those of racial minorities, migrants and indigenous groups). Scores above 0.7 in the components of fractionalisation, cohesion and stability also indicate a positive climate for engaging cultural participation, and the promotion of intergroup cohesion. Relatively mixed scores in the legislative and structural dimensions signal a level of inequality and lower levels of access to media and communication amongst different communities in the country.

Uruguay’s positive situation around its opportunities dimension is countered by relatively mixed scores in the legislative and structural dimensions. These are particularly related to the components related to multiculturalism, degree of social contact, level of inequality and access to communication. Uruguay’s ICDI score could be improved if its legislative and structural dimensions are strengthened with more attention given to emphasise the presence of anti-discrimination laws and initiatives. This in turn could aid contribute to additional opportunities for social contact and increased access to media and communication, facilitating intergroup contact.