Moving beyond orange T-shirts and multicultural platters on Harmony Day

UNESCO Chair in Cultural Diversity and Social Justice Professor Fethi Mansouri called for more action to be taken in order to address the deeper structural forms of social exclusion and racial discrimination.

“Despite the progress made over the last few decades, as a society we are not actually challenging some of the key institutional cornerstones of discrimination, racism and exclusion, whether at the level of economic power, political or socio-cultural recognition,” Prof. Mansouri said.

Appearing on a discussion panel for Cultural Diversity Week at Deakin University on Tuesday, Prof. Mansouri pointed to research on discrimination that still illustrates quite clearly the extent of institutional barriers.

According to the Leading for Change report released by the Australian Human Rights Commission in 2016, the diversity of Australia’s population is not reflected in its political and economic leadership and across other societal power structures more broadly.

Even though Australia has one of the highest proportion of people born overseas currently standing at 28 percent, according to a recent OECD study, data from the report show that positions in the institutions that govern Australia are almost all held by those of Anglo-Celtic or European backgrounds.

“The figures are absolutely shocking. For example, at the time of publication in 2016, the ASX has no Indigenous representation and reports only five percent non-European,” said Prof. Mansouri.

Calling for a need for deeper ethical commitment, Prof Mansouri asserted that more action needs to be taken to address the deeper structural forms of racial discrimination and social exclusion.

“This kind of transformative work is indeed generational, it doesn’t happen in one year or two” he said, “all of us collectively and individually need to take responsibility for issues of social and economic justice like ensuring the education system at its various levels is more inclusive and representative of the diverse communities that we are.”

In Australia, the International Day for the Elimination of Racial Discrimination has been repurposed into a day of ‘celebration’ of diversity.

Tokenised in the late 1990s by the conservative Howard government, Harmony Day allows for ‘positive’ framing rather than tackling issues of racial discrimination.

Indeed, in the wake of one of  Australia’s most infamous race riots at Cronulla beach, the then Prime Minister said he did not accept the premise “that there is underlying racism in this country”. 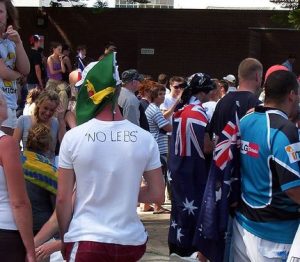 Rather than tackling at it from the surface level, discrimination is “ingrained in the deep structure of the state,” said Prof. Mansouri, and therefore it needs to be disrupted at the very heart of “the legislative, executive, judiciary, the finance and economic institutions”.

Following Iris Young’s Five Faces of Oppression, Prof. Mansouri argued for a need to steer away from cultural imperialism whereby societies take the views, norms and orientation of one particular group to set as the norm for others to follow.

In their current state, multicultural policies while providing room for self-expression and belonging among minority groups are limited by not only their exclusive focus on cultural minorities but also the constraints they operate within. Therefore, on top of leaving members of the dominant culture outside its radar, policy effectiveness is additionally restricted by funding, resources, and the degree of autonomy.

Once we have those deeper conversations openly, only then you can embark onto serious thinking about what you can do to change the status quo argues Prof. Mansouri.

“It’s about admitting that we are not getting everything right and that it is not the end of the road for the ongoing struggle for justice and inclusion, policy statements such as the Deakin diversity and equity plan are a means towards achieving a pathway to rectify, readjust, redistribute power, that what you want,” Prof. Mansouri said.

Exposed to more diverse sources of thinking and being, younger generations are perhaps more capable of “dreaming of a different society in the future” beyond current conceptualisations.

“They do not take their moral and ethical cues from a particular source, they are exposed to so many sources thanks, in part, to the affordances of digital media communication technologies, so there is hope yet for this ongoing struggle,” Prof Mansouri said.