Malaysia is a multicultural country with predominant ethnic Bumiputera (Malays and Indigenous) population (62%), and minorities including Chinese (20.6%), Indian (6.2%) and non-citizens (10.3%) (2917 est.: CIA Factbook 2021). Malaysia was formed in 1963 following its independence from Britain. The first few years after independence were ravaged by racial tensions that were further reinforced by language, religion, and cultural divisions. This led to several ethnic clashes during the 1960s. This was also a period dominated by ethnic dimension in nearly all of policy areas, education, health, employment, immigration, and economic support (Crouch 1999).

In the 1970s, the Malaysian government concluded that the racial conflict was outcome result of economic inequality between the Malay and non-Malay communities. It therefore adopted a New Economic Policy (1971-1990), to correct the economic imbalance among different ethnic groups (Crouch 1999). Recently, Malaysia developed several national anti-discrimination and equality policies. These include general policies with strong anti-discrimination components such as the National Social Policy, and policies designed to directly combat discrimination against certain disadvantaged groups. However, in contradiction to these, some policies that promote the privileged ethnic majority have remained and continue to disadvantage racial and ethnic minorities. 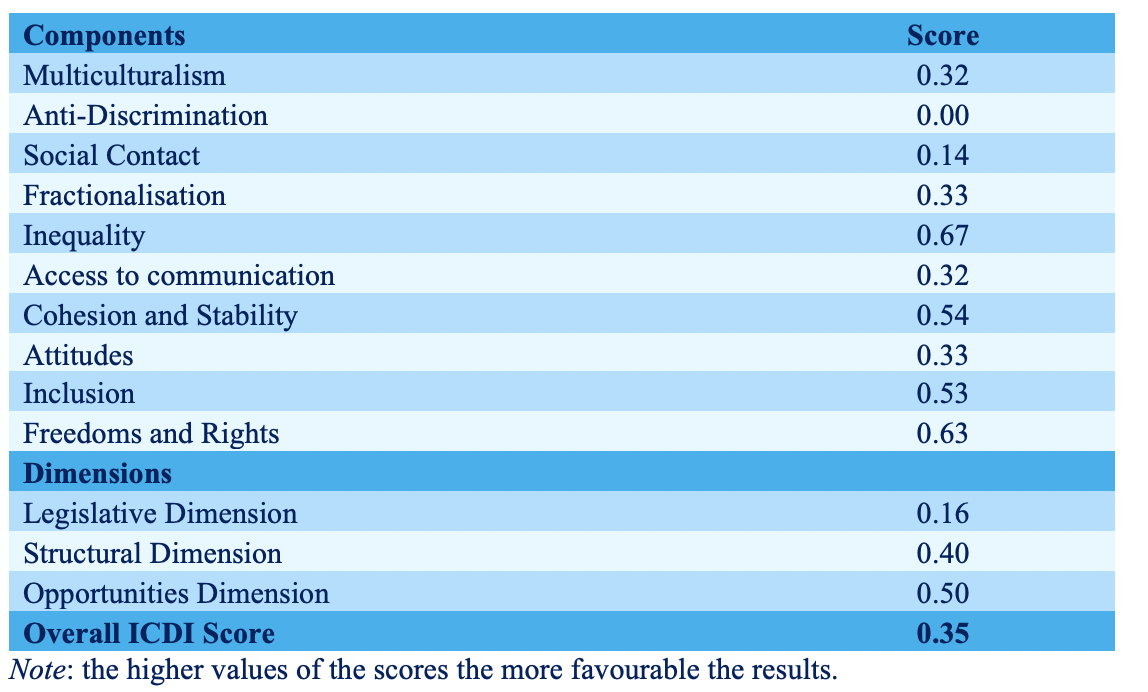 Compared to its average score in its opportunities dimension, Malaysia has attained lower than average scores in its legislative and structural dimensions. Malaysia can strengthen its ICDI score by introducing anti-discrimination acts and or policies which would enhance its legislative dimension. It can also improve its structural dimension by increasing the platforms available for social contact through an encouragement of cultural participation and preservation of both indigenous and immigrant living languages.