Like many western countries, the Netherlands, experienced increased level of post-War migration that had impact on its diversity. As a result, immigration and diversity have become issues of growing political debate, particularly since the 1980s. In the 1990s, the Dutch government introduced policies to manage immigration and ethnic diversity with the purpose of achieving civic integration (Boog 2019). The composition of immigrants from Africa, South America, or Asia including labour migrants from former Dutch colonies comprises slightly below a quarter of the population. Since the late 1990s, the discourse on the government’s civic integration policy took an exclusionary direction. Right-wing politicians have begun fomenting a discourse that marginalised and denigrated minorities. For example, the government problematized issues of social and cultural gaps between Dutch natives and immigrants in its 2003 revised national integration policy. (Boog 2019, p. 1999). Muslim migrants were particularly framed as possessing cultural practices that were incompatible with Dutch norms. This representation of Muslims and Islam has been at the heart of debates on multiculturalism in contemporary Dutch society.

While multiculturalism is not endorsed by legislation in the Netherlands, ethnically diverse schools could opt for the adoption of multicultural curriculum (Tolley 2011). Netherlands has also anti-discrimination policies that ensure social equality, including the representation of ethnic minorities. Yet, there remains a persistent inequality the Dutch society, with limited representation of ethnic minorities in media and other sectors. 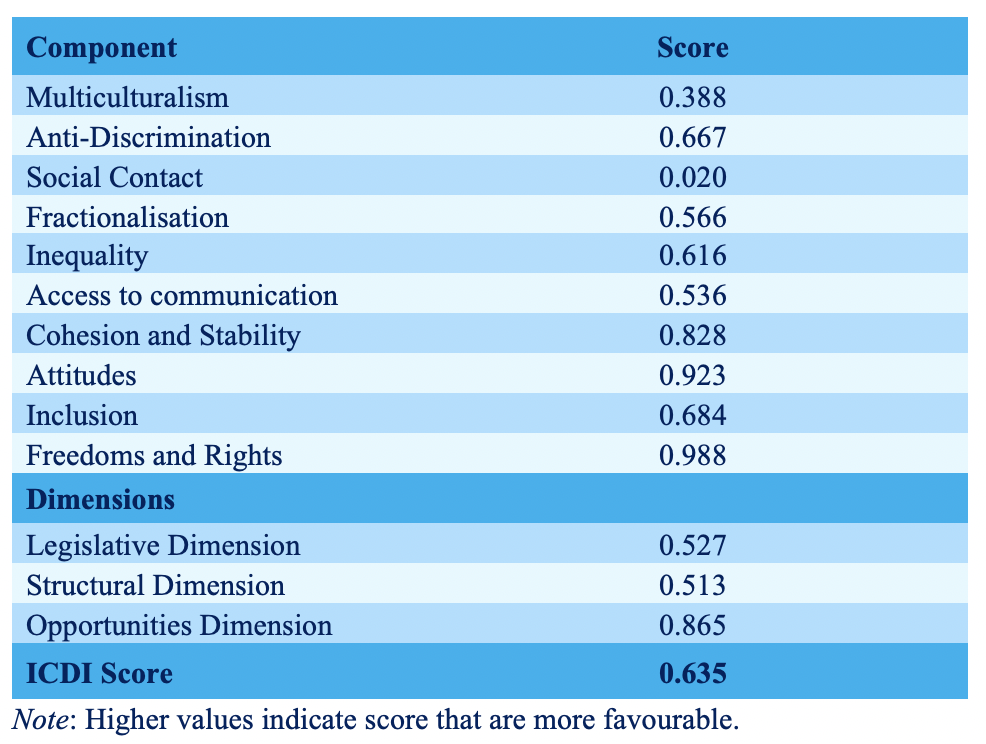 Netherlands has achieved an overall ICDI score of 0.635. The country has achieved high scores above 0.9 in the components of intercultural attitudes and freedoms and rights, indicating a conducive and positive intercultural opportunities dimension. On the other hand, relatively mixed scores, particularly in the components of multiculturalism and social contact indicate a less positive, basic legislative, policy and structural dimensions. Mixed scores averaging 0.5 to 0.6 in most other components also contribute to the legislative and structural dimensions of the country.

Compared to its positive situation around the opportunities dimension, Netherlands achieves relatively lower scores in the legislative and structural dimensions. The lower scores are particularly related to the number of diversity or multicultural acts or policies in place. Netherland’s overall ICDI score can be strengthened if more attention is given to introduce additional multicultural and diversity acts and increase the platforms available for social contact and cultural participation.