Russia is a large and ethnically diverse country, with a majority of ethnic Russians (77.7%), and more than 22% ethnic minorities including Tatar 3.7%, Ukrainian 1.4%, Bashkir 1.1%, and others 16.1% (CIA Factbook 2021). After the collapse of the Soviet Union’s in 1991, Russia witnessed intensive waves of migration, mainly form former Soviet states. Migrants from these states reached 74% of the total migration into the country by 2009.

Immigrants in Russia face unfavourable prospects of long-term integration. In addition to the recurrent issues such as the lack of political participation, as in most of Central Europe, migrants face barriers and limits in securing access to nationality.  Furthermore, immigrants face a lack of access to basic rights and equal opportunities in the areas of social services, healthcare, education, and labour market. Victims of ethnic, racial, religious and nationality discrimination have little chance to access justice in Russia, relying on inadequate laws, no direct enforcement mechanisms, and no independent specialized equality body (MIPEX 2020). The absence of a clear policy on multiculturalism and migration often aggravates xenophobia, ethnic and religious intolerance within the country (Lebedeva & Tatarko 2013; MIPEX 2020). 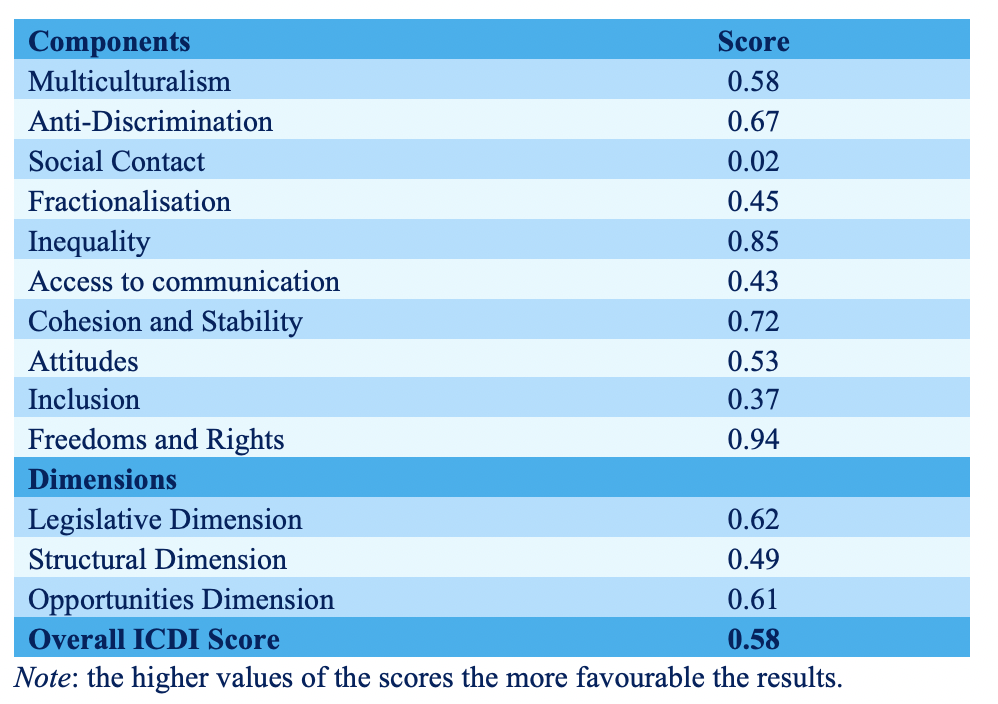 Russia has achieved an overall ICDI score of 0.58. Scores above 0.8 in the components of inequality, freedoms and rights indicate a high degree of intergenerational mobility, education attainment along with freedom of press and foreign movement and travel respectively. Scores below 0.5 in the components of fractionalisation and access to communication indicate a less than average degree of social contact amongst different ethnic groups. Lower scores in the component of inclusion indicates a mild level of minority representation in the country and a low inclusion for minorities index.

Russia has achieved moderate scores in its legislative and opportunities dimension, while there are relatively lower scores contributing to its structural dimension. In particular, its lower score could be attributed to the component of social contact which reflects a lack of cultural participation and a low number of immigrant and indigenous living languages. Russia’s ICDI score could improve with more attention to tourist arrivals, promoting cultural participation and efforts to preserve indigenous languages.