Singapore was founded in 1819 as a free British port, and like many Southeast Asian countries with colonial past has a multicultural society (Lian 2016). Its ethnic composition is divided among Chinese 74.3%, Malay 13.4%, Indian 9%, other 3.2% (2018 est.: CIA Factbook 2021). In 1963, Singapore became a member of the Malaysian Federation, but was expelled two years later, becoming an independent republic in 1965 (CIA Factbook 2021).

The Singaporean government pursues a comprehensive practice of multiculturalism in its policies, which includes bilingual education, management of religious matters, and electoral representation. In addition, race-based self-help and welfare organizations provide ethnic quotas in public housing and food centres, and services targeting disadvantaged members in the areas of education, representation, and religious freedom. (Lian 2016). However, the absence of political opposition and a strong civil society in Singapore has limited debates over what form of multiculturalism should take place in the country (Lian 2016).  There is no clear commitment in part of the Singaporean government to integrate migrants within the society. 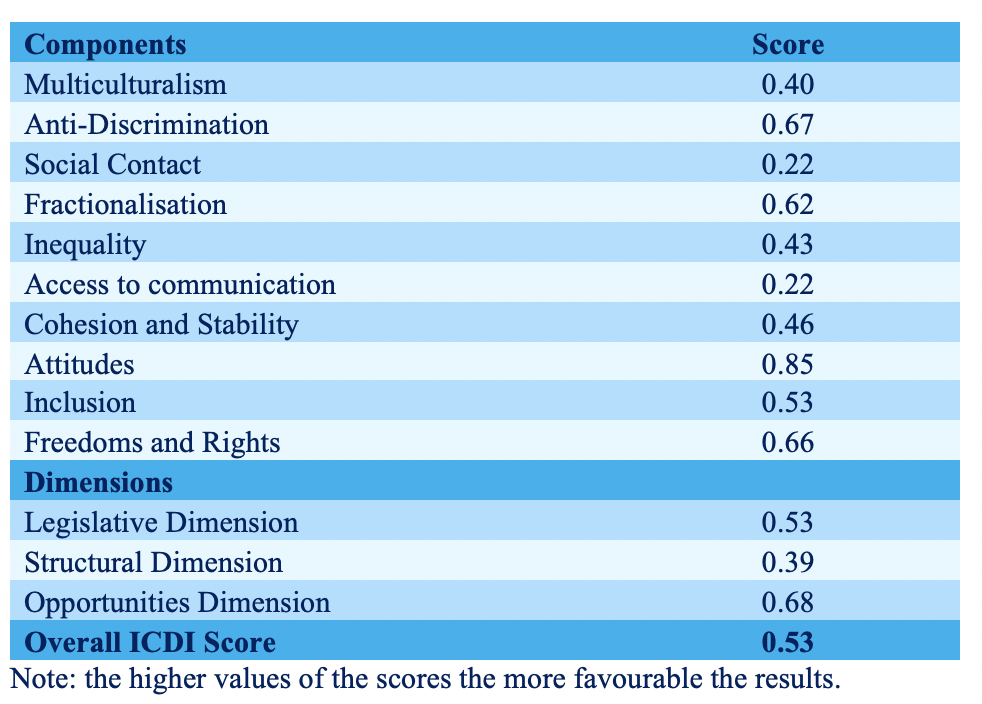 Compared to its average situations in relation to its legislative and opportunities dimensions, Singapore has attained lower scores in multiple components of its structural dimensions. The scores below average are related to the components of multiculturalism, inequality and cohesion and stability. Singapore could improve its ICDI score by strengthening its legislative dimension with robust acts and policies which support multi-culturalism and diversity and improving its migrant integration measures. It could also promote avenues for engaging cultural participation and facilitate a wider range of newspapers to be published to promote access to communication. If the current situations around the three dimensions persist, there is a likelihood of deepening fractures between different ethnic communities.